The things that children say 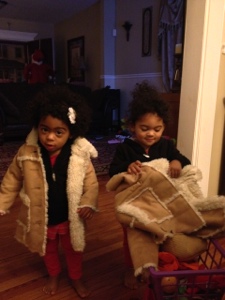 I have experienced my first belly laugh caused by one of my children. I know that many parents have experienced this before and I have heard hilarious stories but when it actually happens to you it’s remarkable..lol. My little Kennedy whom I call ms independent, personality, diva, fashionista has officially begun to give opinions on what she will and will not wear. The latest occurrence took place yesterday when we finally had a chance to open a gift from my M I L. She gave a gift to the children after the thanksgiving day parades Santa float appeared. It’s a tradition… Maybe some are aware of it. Anyway I finally got a chance to show the gift to the girls and it was a sheepskin, beige (I won’t disclose the name but for those children shoppers of all local kids stores know where it is from) jacket/coat with a hood and buttons etc. At first glance I looked it over and then asked the girls to try on the new jacket. Well Kennedy says NO! Vittoria then follows with a NO! Now I begin to convince and plead… Just try it, it’s beautiful. Finally my husband comes home and I tell him to try. He gets Vittoria to try it on and then Kennedy. Well she put on the jacket and once the hood was placed on her head she looked at her dad and said RUG??! She immediately took it off and placed it in her shopping cart. I guess she will be returning it. FYI we must have the same taste..